I’m currently on a flight home from a whirlwind east coast trip… while cramming NY, Philly and DC into four days was hectic – it was the two prior weeks that really tested my endurance.

My weekend kicked off a day earlier as I partnered up with progressive and a few of my favorite gals on two wheels. The last time I was in JTree I was shooting a commercial for the new BMW Scrambler so it seemed only appropriate that I bring the same bike back out to the desert – The German’s were nice enough to loan me one out of their la press fleet so my day started with an early drive south to snag the bike. After a quick ride by bates leathers (to pick up my brand new custom race suit – yay!) I was on the road to lucky wheels garage in downtown la to meet up with the progressive team. The ride out to babes this year was great – I love nothing more than feeling super comfortable with the people you’re riding with and everyone being on the same page – for things like snack breaks, obv. 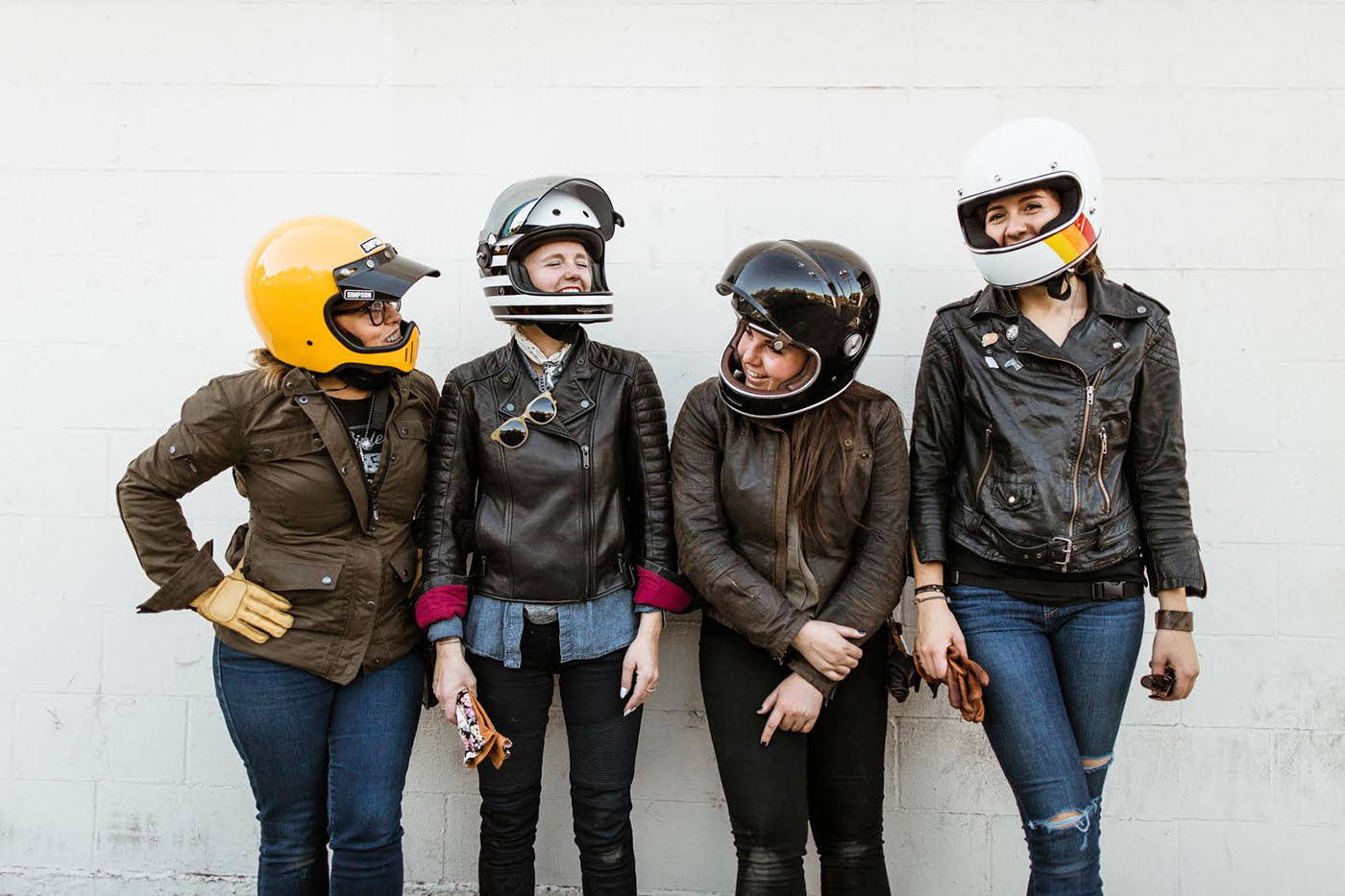 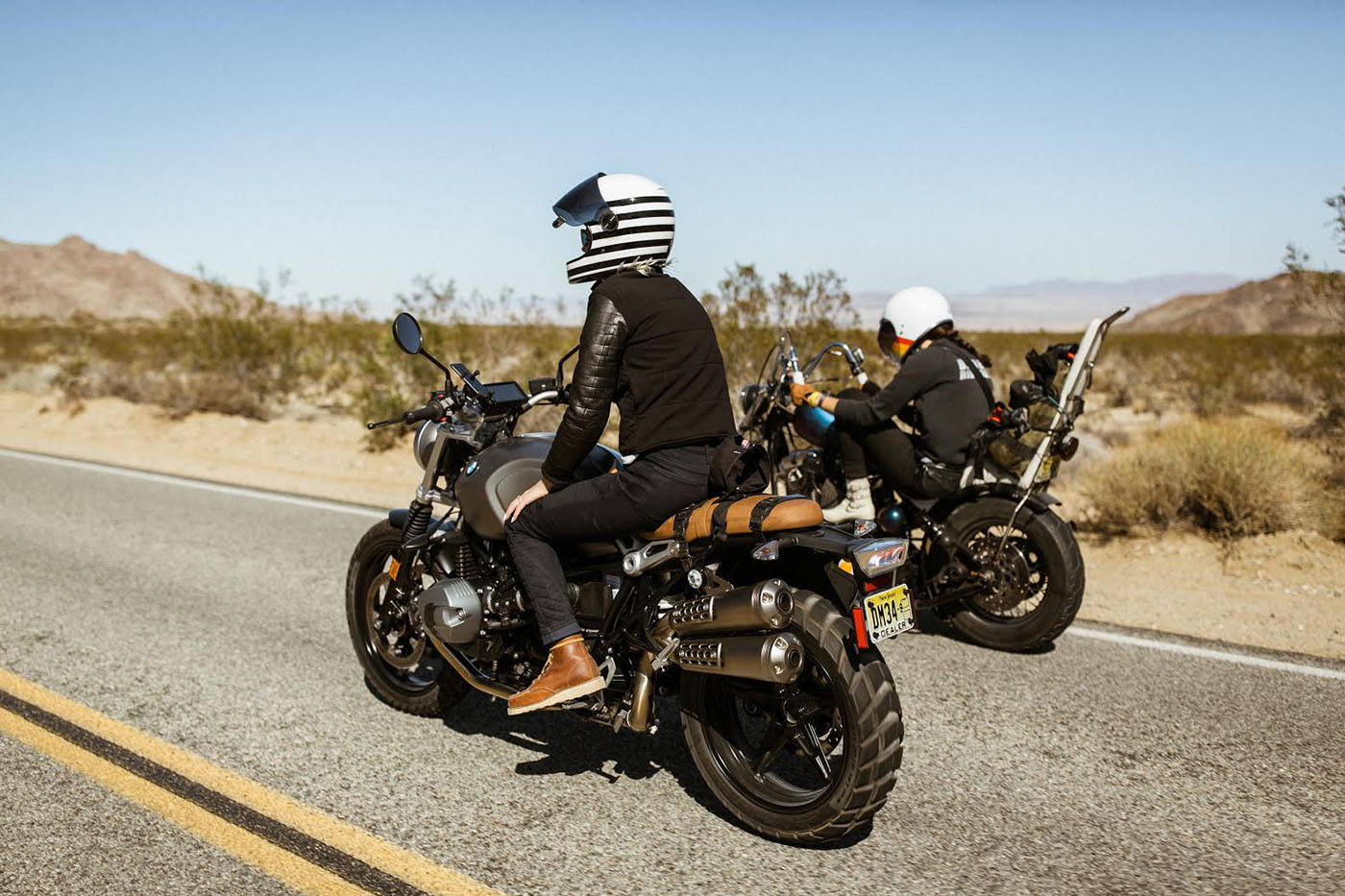 In the desert w/ my ride or die, Virginia: Photo: @Jenny Linquist

Babes this year couldn’t have been better. The space and layout was just right, the brands that participated all showed up with fun experiences / activations, the weather was perfect, and then there was PRINCE. As part of the progressive thing I was tasked with leading a few rides out of camp. Each day we were met with a fun group of folks from all over the place, on all kinds of bikes, and varying levels of experience. For me rather than logging a ton of miles these rides were about connecting people, sharing experiences, and showing just how much the desert can look like a Dr. Seuss book.

Babes high: I struck up a convo with a gal who was by herself for one of our rides and learned that she’s been an instructor for over 20 years and ridden all over the world – she casually mentioned her son worked for Ducati and before I could sensor myself I blurted out ‘KATHY?!’ turns out I’ve been stalking her racing history through her sons Instagram for years – I spent the afternoon fanning out, hearing all her stories, and just reeling at how people can come together at bro. 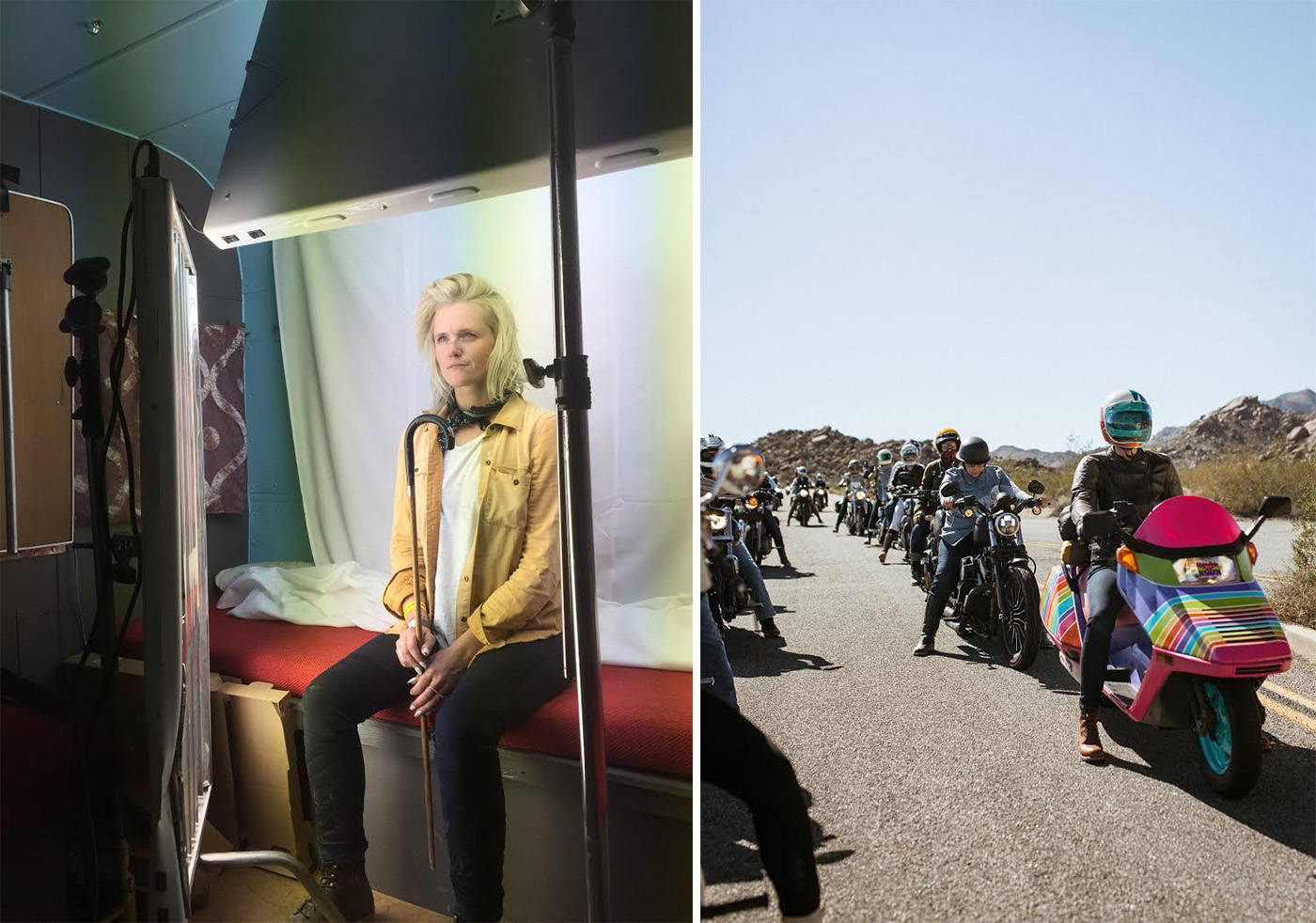 I was 4 days dirty from sleeping outside and not showering, had no voice from too much chatting, and a wind chapped face from all the riding by the time I made it over to the ace hotel. Not only did my husband and puppy drive out to meet me but my mom, sister and niece just happened to be visiting Palm Springs so I was able to fit in some family time before flying to Japan the next day.

I’m skipping a whole hectic ride back to la through a storm, a couple flooded freeways, some leather dyed orange hands, a passport forgotten in Palm Springs, a husband/sister passport handoff in a Mcdonalds parking lot, some last minute making out, blah blah blah. I made my flight, slept 11 of the 12 hours and woke up 16 hours in the future to a spaghetti breakfast. 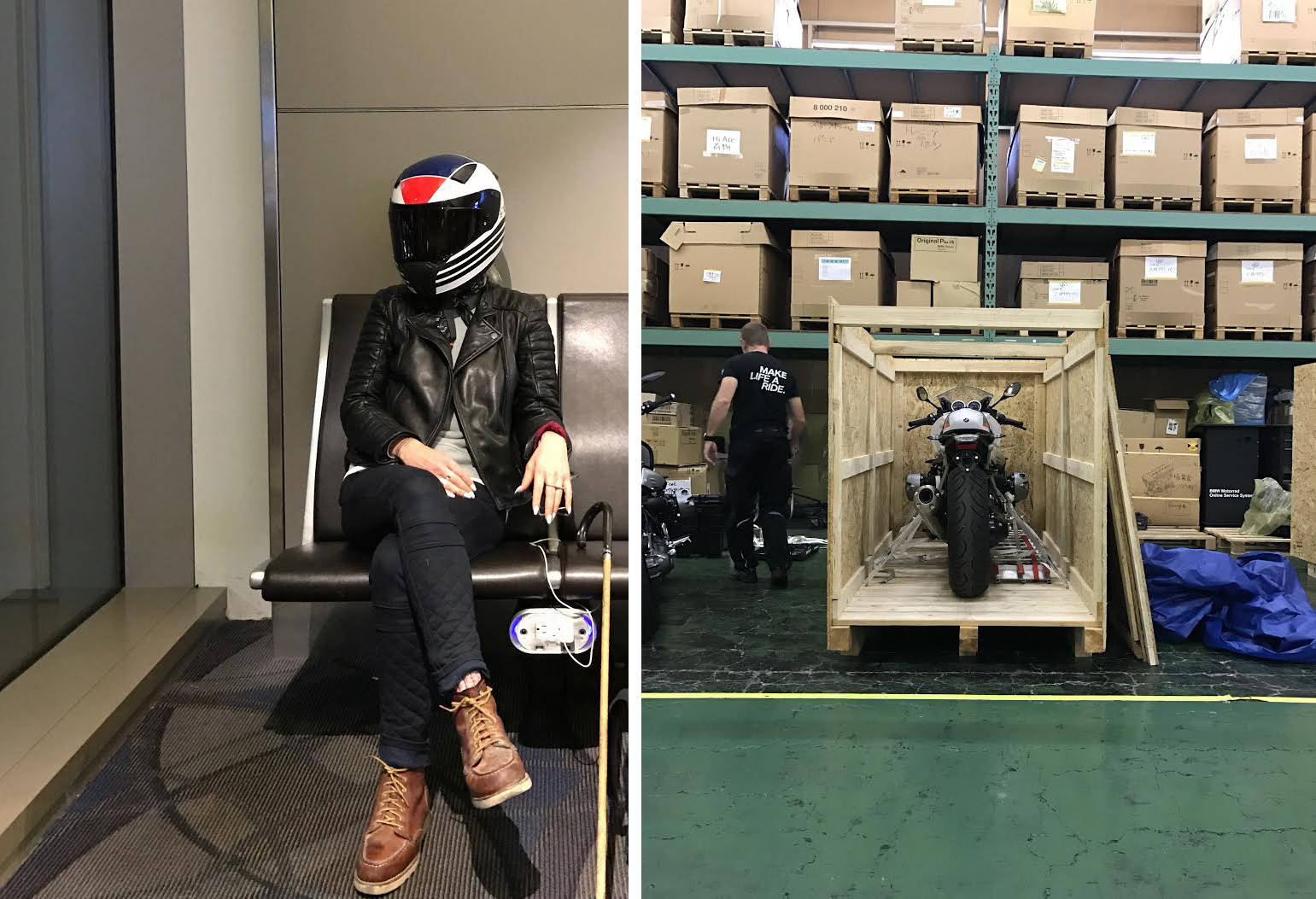 I was in Japan to shoot a campaign for the new BMW R9T Racer and explore the city for my first time. My trip started by unpacking the bike from its crate, straight off the plane from Germany – this was a prototype bike so the only one of its kind and dropping it or fucking it up in anyway would be a super bummer. While I’ve spent a good amount of time on the R9T and the R9T Scrambler, this bike has a v. different riding position and more limited steering range so it took a little getting used to – there was the whole ‘riding on the wrong side of the road’ thing too. We had long days but catching the sunrise every morning, seeing so much of Tokyo and meeting the raddest folks made three hours of sleep each night totally worth it. (I should mention that I am an expert napper so give me ten minutes and a beanie and I’m out like a light.) 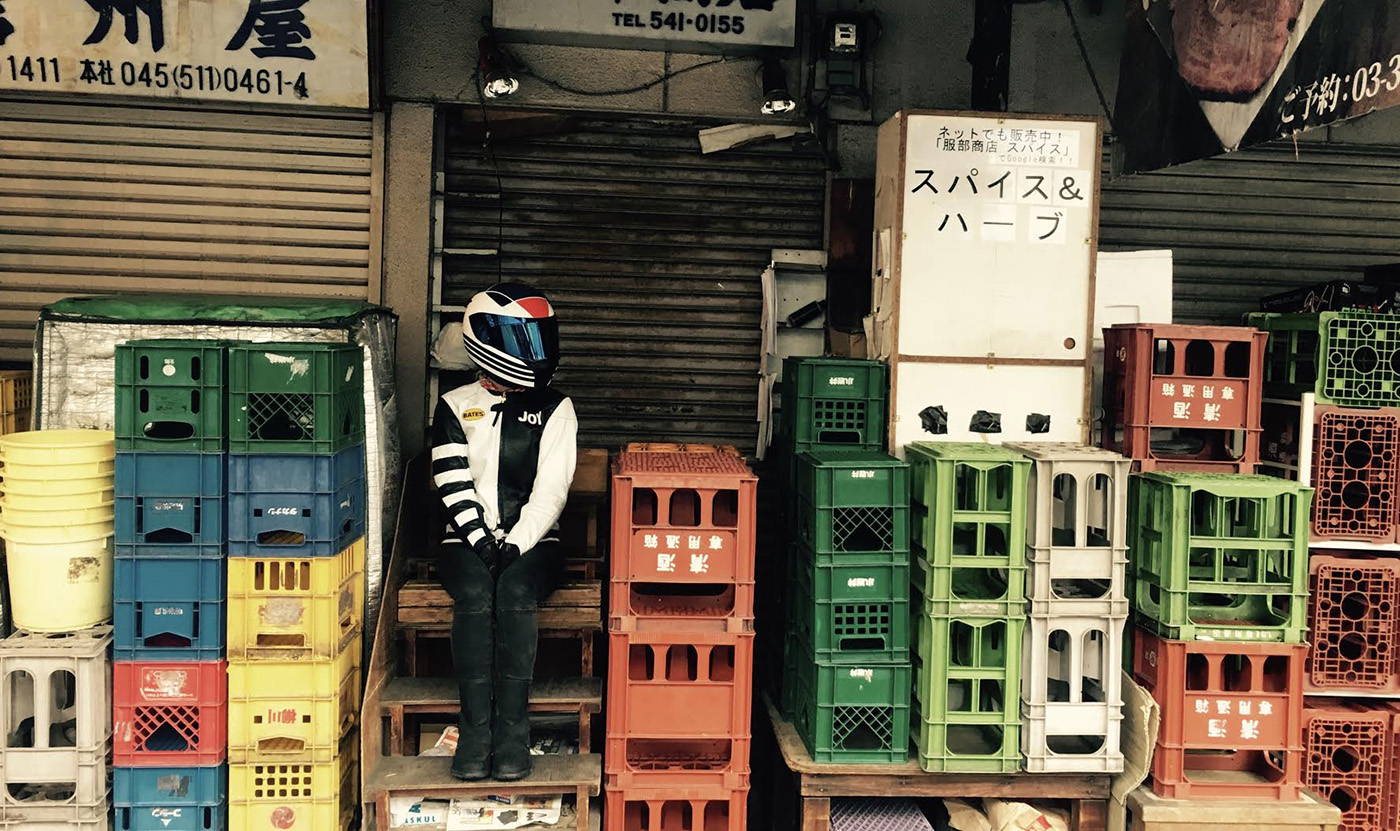 You may or may not know but there is a pretty great culture around 70’s racing in Japan – lots of throwback super-sport bikes and guys who have raced all over the world. The stories were amazing, the bikes beautiful and the race tracks we rode were in the shadow of Mt. Fuji – not lame at all. I made it through the week with new friends and without fucking up the bike – fingers crossed the content turned out.

Japan high: A three-way tie: Ichi: my first ride over the rainbow bridge at sunrise where we were going faster than the camera car would’ve liked but perfect for the circular on and off ramps where I could feel just how the fun the bike could be and had a glittery cityscape in my peripheral. Ni: One of the guys I met, Ted, has been racing over 25 years and working on factory teams as a mechanic his whole life – he brought photo albums and sat with me for hours sharing stories of all the legends through racing history. San: I had the honor of meeting and riding with Shiro Nakajima of 46 works, racer and bike builder. At the end of our track day he told me I had a very elegant riding style. Ummmm wow. Blushing so hard. 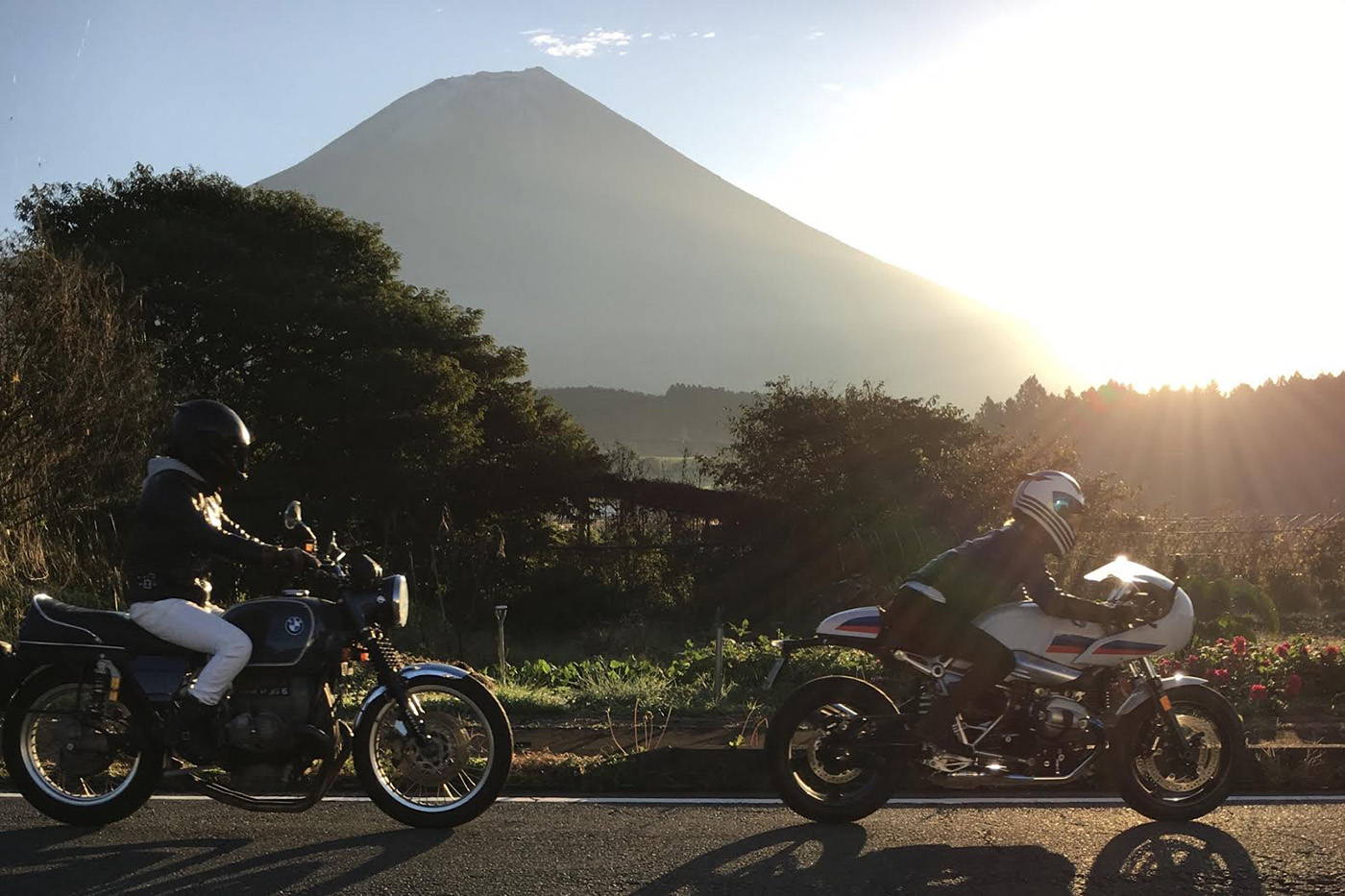 Sunrise at Mt. Fuji with Shiro

After a few days back home, catching up on sleep and work I was on another plane east, landing in NY with enough time to get to the polls to vote. Reflecting on whirlwind stretches is fun and reminds me of each morning my dad would burst into my room yelling ‘wake up and live, don’t you know people die in bed?! 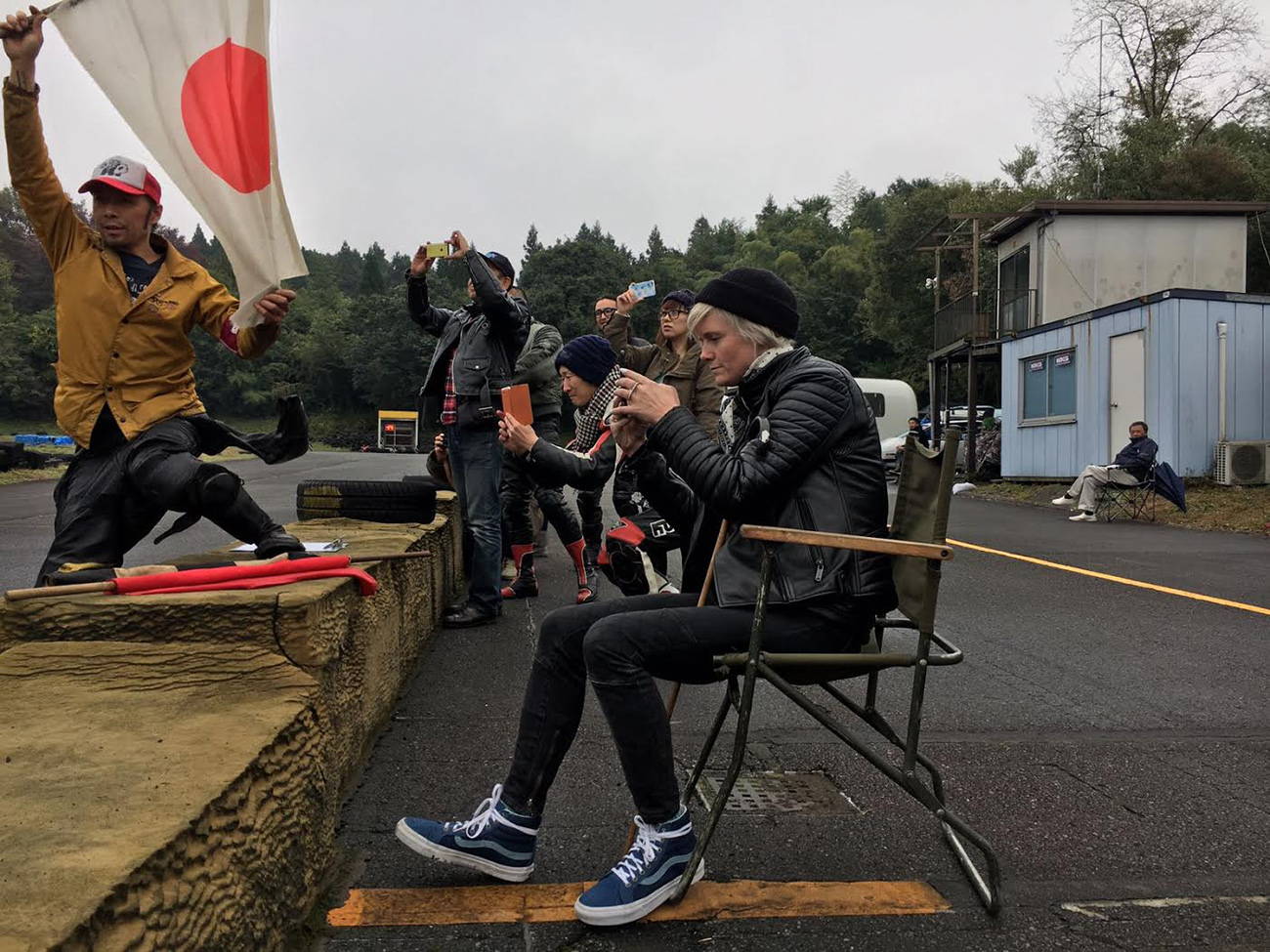 Being a tourist in my Alltime Moto Jacket..