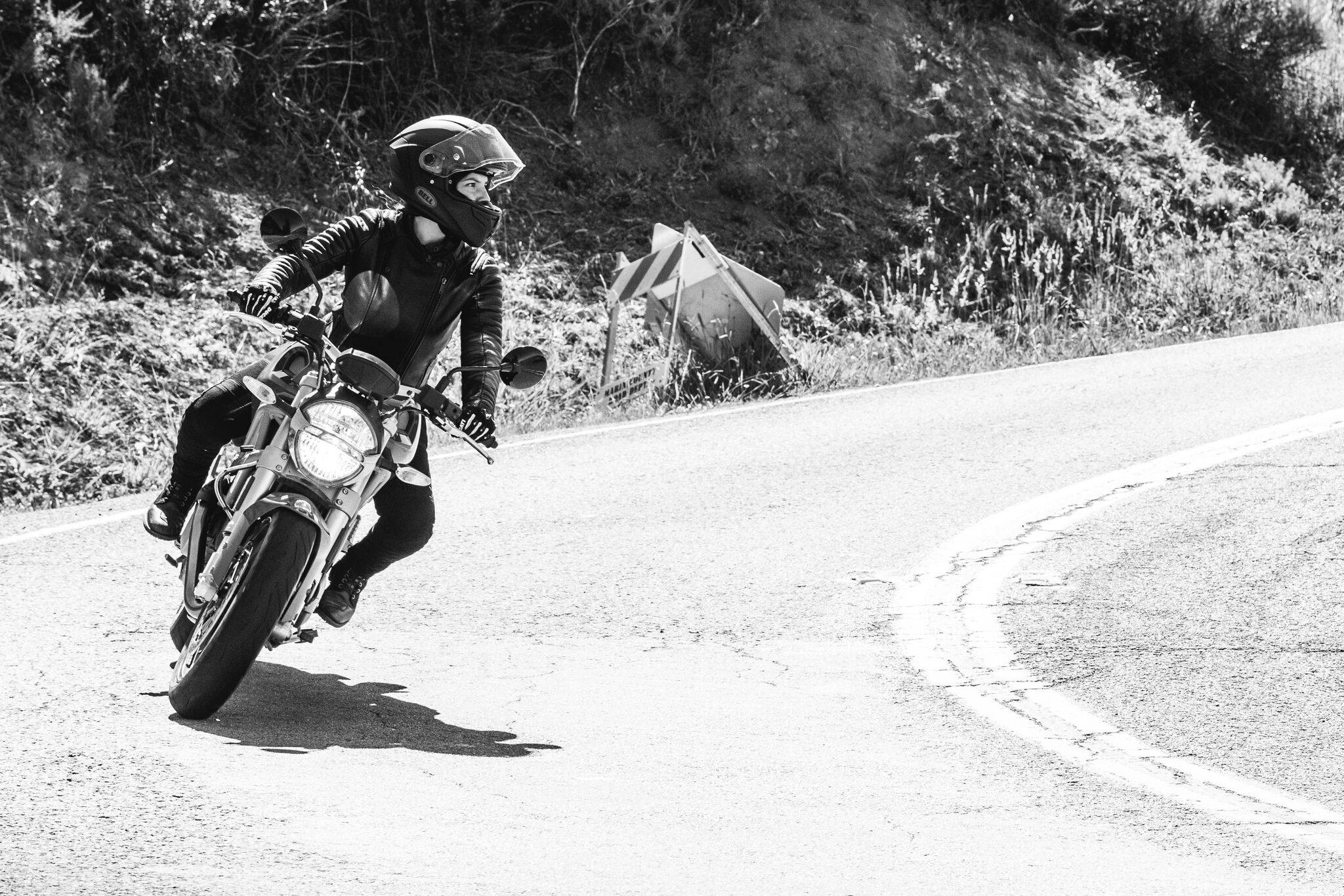 Five days won’t be enough.” My dad explains to me for the hundredth time over the phone.

My plan was simple. Book a one-way ticket to Denver, pick up the bike I just purchased, and ride it home to Santa Cruz. How were five days not enough? I’m only navigating through four states — 2,000 miles tops. Was my dad concerned about my riding abilities? Was it my occasional knack of wondering that worried him? Not to mention, I felt spoiled taking so many days off from my 9-5. My out of office email proudly proclaiming, “I’ll have spotty cell service for the next few days...” was a dream come true.

I reassure him. “Dad, I think you’re crazy. Five days should be plenty of time to get home.”

At this point, we were talking almost every day leading up to my trip. Planning, scheming, reminiscing about the long-distance rides we accomplished together while I was in grade school. Every summer we planned a different expedition from Colorado to Laguna Seca for AMA, World Superbike and MotoGP weekend. We two-upped on his 1987 BMW K75 and followed two rules — no highways and no chain restaurants.

We traveled thousands of miles together. Crater Lake, Redwood National Park, Death Valley, Bryce Canyon…I saw most of the West by the time I was a freshman in high school. Little did I know those trips would end up shaping me for who I am today, and for t

hat, I will forever be grateful.

But this time was different. I was to accomplish my first cross-country ride, solo. To pay homage to my upbringing on the K75, I asked my dad to help me plan the best route. Delighted by the task, he stated, “I’m not giving you big mile days, but I don’t want you to dilly-daddle either.” He ended up choosing a route we had ridden years ago and 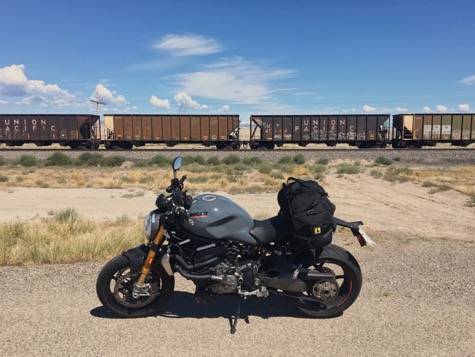 dedicated a state for each day. The fifth day was a cushion in case I wasn’t making good time. The night before I left he sent me an email with the route explained in great detail — most likely from memory. Adding reminders in between directions like, “GET GAS!” or, “USE MAPS and NOT only a GPS.” And my favorite, “Bring snacks and WATER.” The most important things capitalized, clearly.

I took a screenshot of the email, boarded my flight, and headed to Denver.

As a proper send-off, my best friend Abby rode with me the first day through Colorado. Every mile a new memory surfaced of countless motorcycle trips we’ve done years prior (and years to come). It was then I realized this trip symbolized more than what I cared to admit…my new motorcycle was the last tie I had to Colorado. I try to hold my possessions loosely, but somehow the 150hp machine underneath me was carrying my past and future across state lines. I had moved everything to California — my career, my ambitions, my familiarities. Abby knew to be by my side as I made my final transition into the next chapter of my life. Even though we never exchanged the words, we knew what was taking place.

We said our goodbyes in Rangley, CO and I headed toward Utah’s border. Alone.

It took me a few hundred miles to absorb what was happening. I’d laugh with excitement one mile, cry the next, sing aloud when a song was stuck in my head, then finally became comfortable in the silence of my helmet. The next 1,400 miles to California were mine to cherish. The next four days of this ride were mine to create.

Before I left, my father reminded me to enjoy every moment and every mile…and that’s exactly what I did. 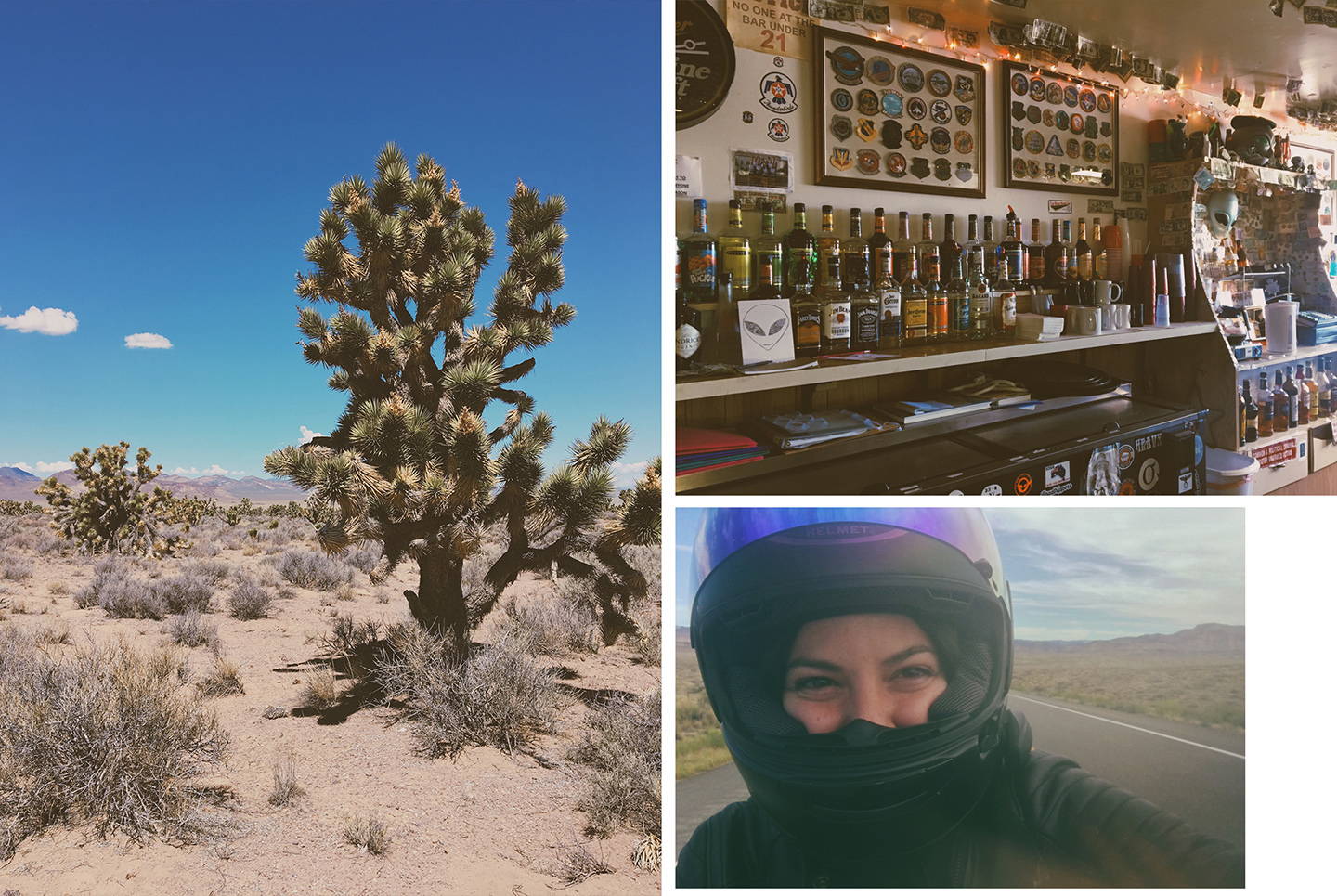 Of course, the scenery was breathtaking. Of course, each sunset was better than the last. The winding roads and open countryside I found myself on were unlike anything I’ve experienced. But the kindness, conversations, and curiosity I encountered from strangers at every stop is what ignited something inside me as I traveled further west. And it kept getting greater and greater each hello and goodbye.

My most inspirational encounter happened with a woman by the name of Dafna. She had been on the road since 1996 and was headed south to Argentina to guide a motorcycle tour with her husband. We were both gassing up in Loma, CO and gave each other a friendly wave from afar. Next thing you know we’re exchanging emails and planning possible places to meet over the next few days, months, even years. Her seasoned spirit, calm demeanor, and knowledge of the world was something I longed for. So much that at one point I thought to myself, “What if I just followed her down to Argentina?” 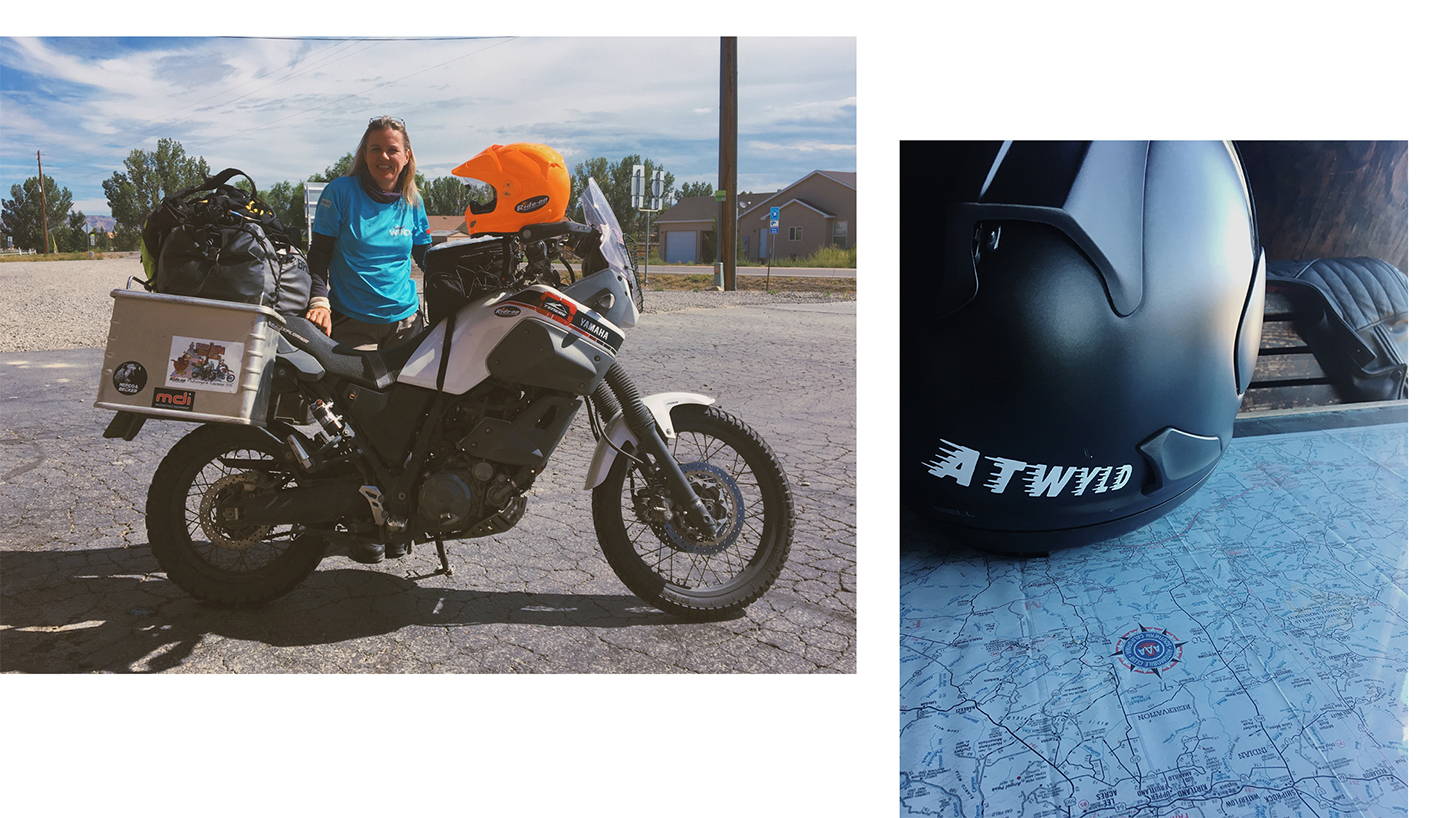 Over the course of my trip I met a handful of two-wheeled travelers like Dafna. All of us doing the same thing — not using our bikes to escape the real world, but live it. Exchanging stories at gas stations over granola bars and bottles of water, (dad, read: WATER), talking about future trips, stating different goals we had placed on ourselves before the next stop, and openly discussing what encouraged us to get on the road in the first place. The interactions with fellow travelers and locals alike became the root of my trip and new favorite pastime.

Mark Twain once said the two most important days in your life are the day you are born and the day you find out why. According to Mr. Twain, I experienced the second most important day in my life while riding south on Highway 12 in Utah. It was dusk. The sky was changing colors by the minute as my gaze kept steering left to capture what was taking place. I pulled over, got off the bike, and walked to the edge of the road to witness the Waterpocket Fold of Capital Reef National Park at sunset. In that moment, I was overwhelmed with the discovery that I was born to experience the beauty of this world, and more importantly the people who inhabit it, at whatever cost. 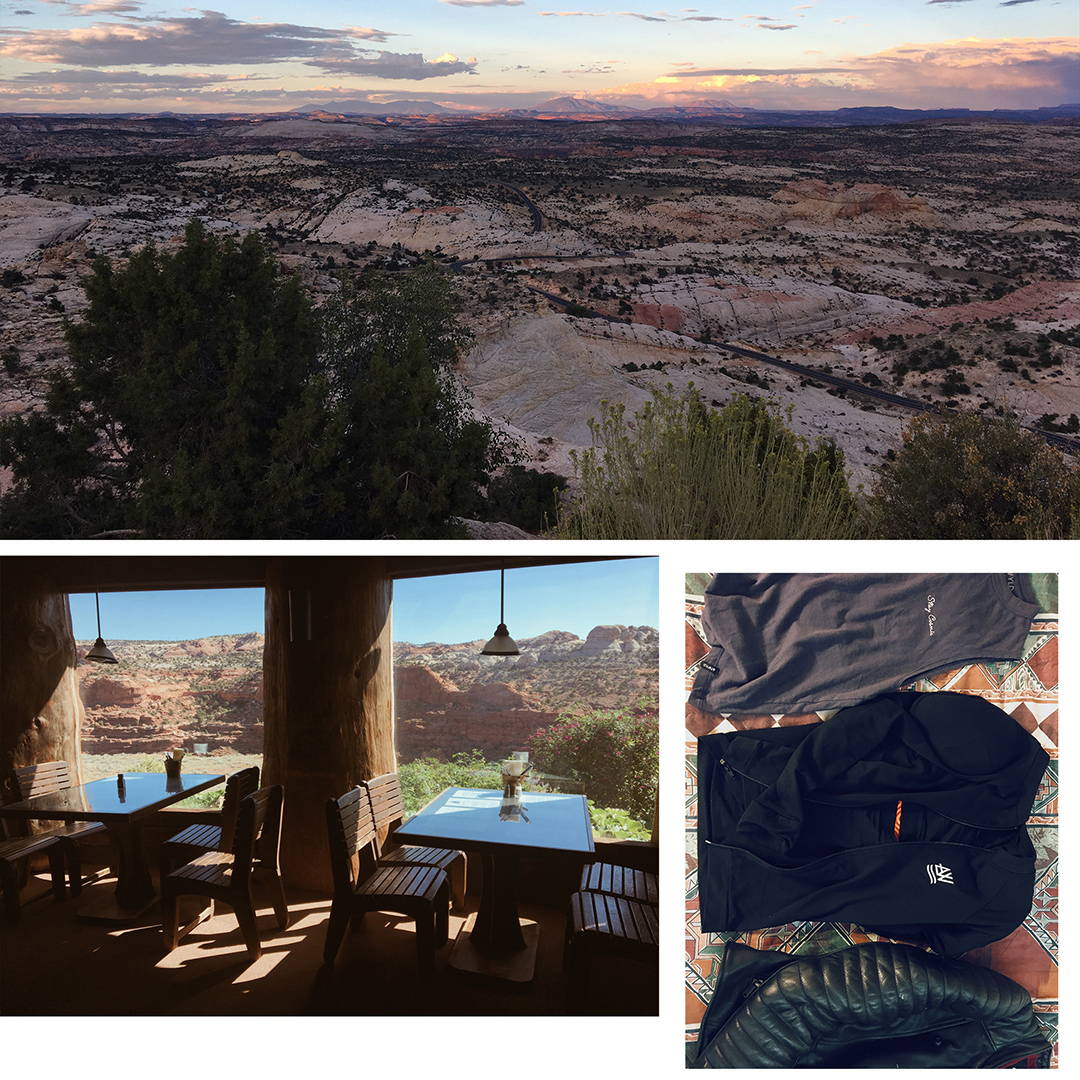 The discovery seems so simple, so cliché. Everyone in their right mind wants to explore the world and see new places. But oftentimes we only reach those new experiences when the timing works for us. When paid time off and prices of flights meet in the middle. This isn’t about having a full-time job vs. being a vagabond on the road. It’s about discovering what truly fulfills you in life and finding ways to make it a priority — no matter how uncomfortable it is facing the unknown to get there.

My epiphany wouldn’t leave me alone. It quickly became the fuel behind each experience I created moving forward. The more I was giving myself to others, the more conversations I was having with strangers, the more fulfilled I was becoming. And the best part was realizing my motorcycle was the tool helping me get there literally and figuratively. The perfect combination? You betcha.

After traversing Bryce Canyon, the Extraterrestrial Highway, Yosemite National Park, and the armpit of California (sorry, Modesto), I wound up riding straight to work on my last leg of the trip. I had used up all five days on the road, fully enjoying myself. I left Modesto at seven in the morning on Monday and ended up at work at 9am; myself and the Monster fully covered in bug guts. 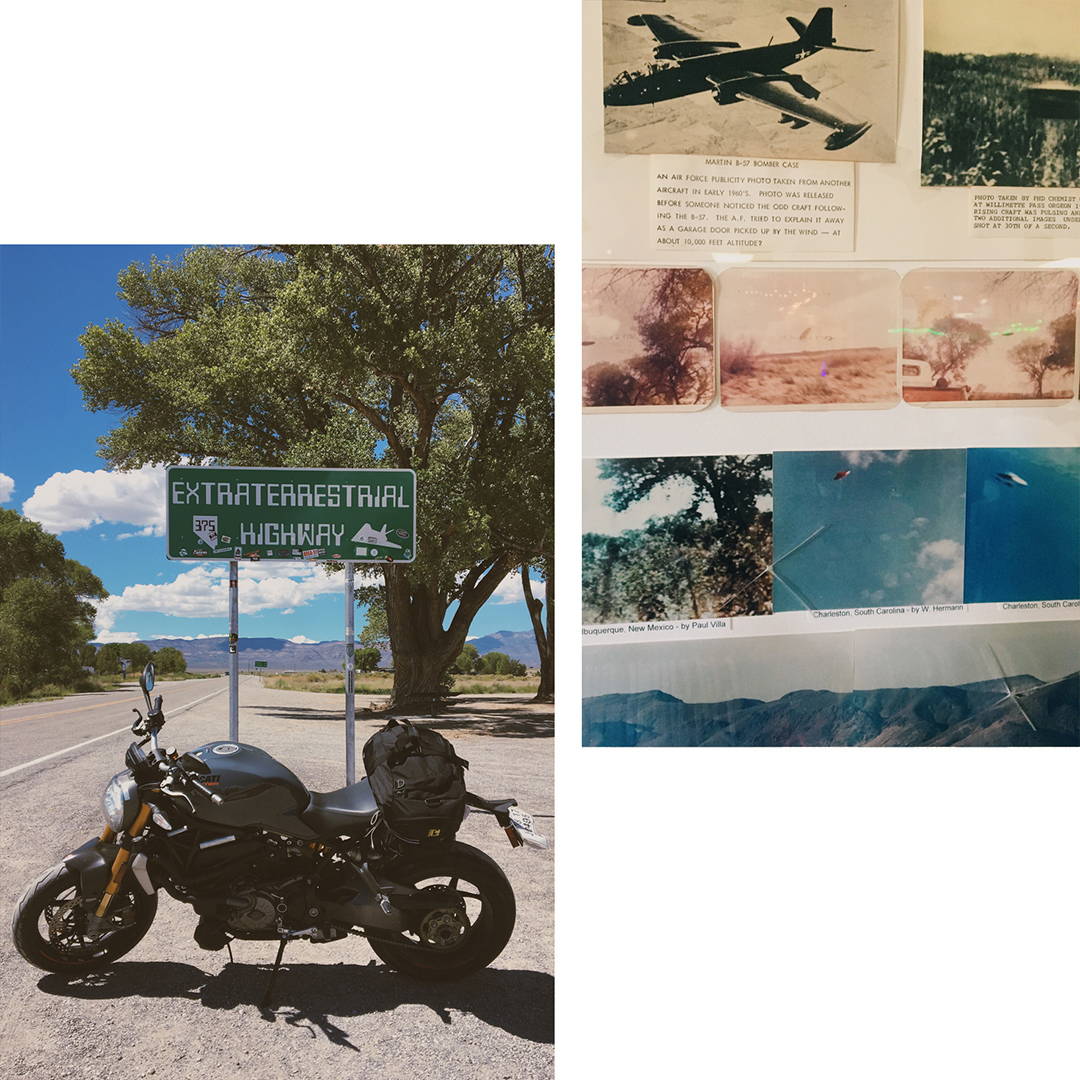 The first chance I got, I made a very important call. “Dad, five days weren’t enough.” He laughed and laughed in his warm, supportive way, and for the first time I wasn’t offended when he said, “I told you so.” What I’d originally taken as fatherly, was him actually stating the obvious. Five days will never be enough. It was a father/daughter moment I’ll hold tightly to my chest for the rest of my life. He knew the exact high I was feeling and was truly happy for my discovery. It occurred to me the trips we did together years back planted a seed in my adventurous spirit; the same one he carries. It’s safe to say it’s grown into something bigger than I expected, and has got me feeling some type of way.

I don’t know what the next chapter of my life looks like, but I’ve discovered what makes my heart whole so I’ll start there and see what happens. Instead of calling them baby steps, I’m calling them baby trips as 2018 is already taking shape. I’m headed to Central Coast wine country in a few weeks, planning a trip to Canada, and perhaps riding the east coast to trace back my grandparents’ origin. Let’s meet up along the way?

In anticipation for my future trips, I’ve added to the “no highways and no chain restaurants” rulebook. What made the list:

Take the extra time to introduce yourself

Pull over the minute you think, “wow that’s beautiful”

When two Mormons in a truck ask if you want to race to the next town, say yes (I won, duh)

Whatever house special is written on the chalkboard, order it

To the people I shared this trip with — thank you. Your stories, encouragement, beers, and generosity is something I’ll carry with me for miles to come. See you on the road. 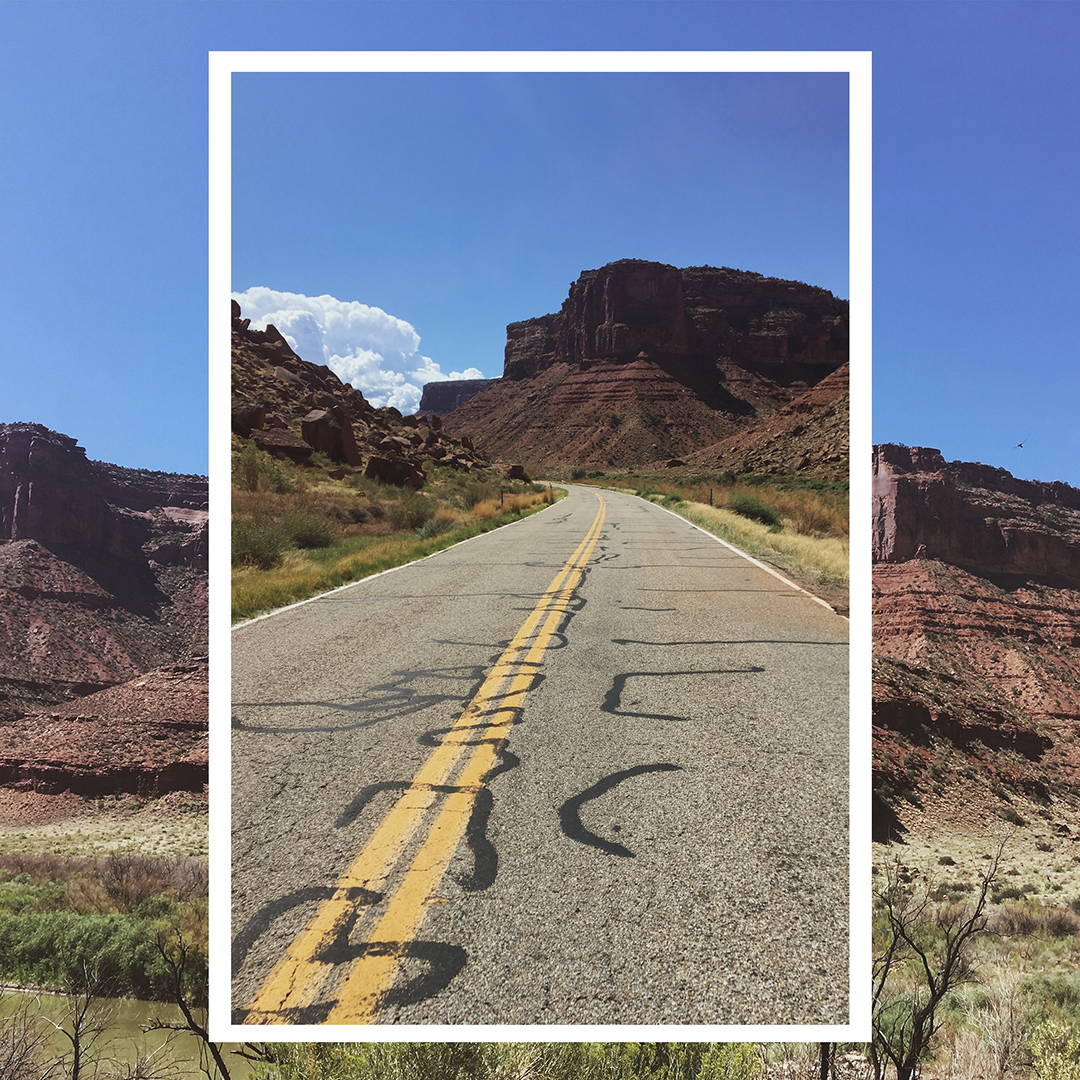